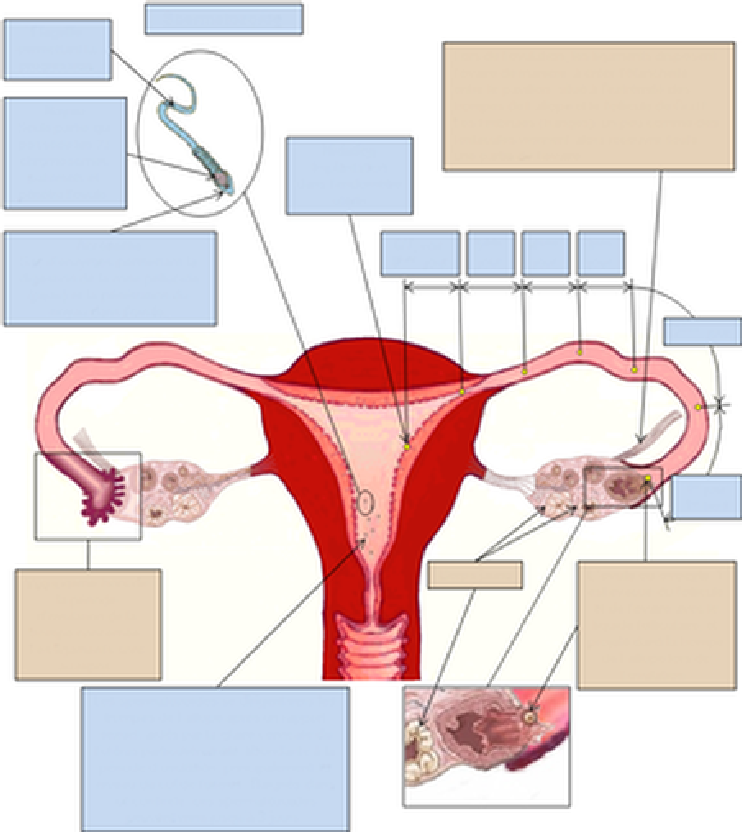 During ovulation, the ovarian ligaments position the ovary in order to avoid leakage between the pavilion located at the end of the fallopian tubes and the follicle Graff. Fimbriae (fringes), a little like tentacles come then cover any part of the ovary.

in the uterine endometrium

is discharged from an ovary with follicular fluid, and projected into the fallopian tube during ovulation.

The spermatozoa are moving towards the fallopian tubes after sexual intercourse, assisted by the cervical mucus of the uterus particularly abundant in the ovulation period, primarily in the cervix. Bathed in this context, these sperm cells can live for up to 3 days.

External sight, outside the period of ovulation tube concerned. The ligaments are at rest

Bag of enzymes makes possible after his break, digestion of the pellucid zone (skin) and the penetration of the nucleus into the ovum.

Flagella or flagellum permitting the progression

As we can see it above, which is wonderful for humans as for any mammal, it is this set of organs forming a protected location for fertilization of the ovum at a time outside the body maternal and internal to the mother. Outside the mother's organism because any introduction of a cell which would not be comply with all genetic of the mother in one of its cells would be fought by the immune system, and internal to the mother, to preserve the safety and survival of the fertilized ovum in a protected environment that will allow in addition establish the first mental bases of the fetus. So there is never directly introduction of the genetic male component in female carnal tissues. Impregnation is always in a phase where the ovum is suspended before being implanted again in a manner protected from the rest of the individual through a placenta for feeding and development of the embryo and fetus which genetic data are only fifty percent consistent with those of the mother.

We see how complex the system and how nothing is left to chance, even if only in the recovery system of the ovum by the Fimbriae (fringes) and the pavilion of the fallopian tubes at the time of ovulation . At this point, even the ligaments supporting the ovaries make in kind to adjust the  bodies them so that there is no expulsion of the ovum outside the receptive organs.

The Fallopian tubes are then dimensioned in order to preserve the fertilized ovum in suspension during the period which will allow him a succession of transformations per division (Cleavage) of the first cell called also “zygote” after fecundation.  The movement takes five to seven days, see the eighth day depending on the speed of successive divisions. These divisions allow the specialization of cells; some of which become placenta  after implantation (trophoblast cells) and others are specialized in embryonic development (embryoblastes cells, called inner cell mass).

It is only since this moment that can be made implantation (or nidation in French, i.e. to make its nest), but we could almost say the reimplantation in the mother's body, this once, in the endometrium (mucous membranes of the uterus). The difference is however fundamental, because the ovum (ovule) during ovulation, also called oocyte 1, contains only twenty three maternal chromosomes, whereas this future human being now contains forty-six with the ones 23 of the father, whose the sexual determining X or Y.

When the follicle of de Graff reaches its maturation, the ligaments supporting the concerned ovary allow positioning above the location where this ripening on the ovary to have seal between it and the Pavilion of the proboscis concerned during ovulation. The follicular liquid which is then projected in the Fallopian tube with the egg (oocyte 1 at this stage) Act as both protective gel and carrier but given that it contains a lot of progesterone, it is also bait used to sperm.