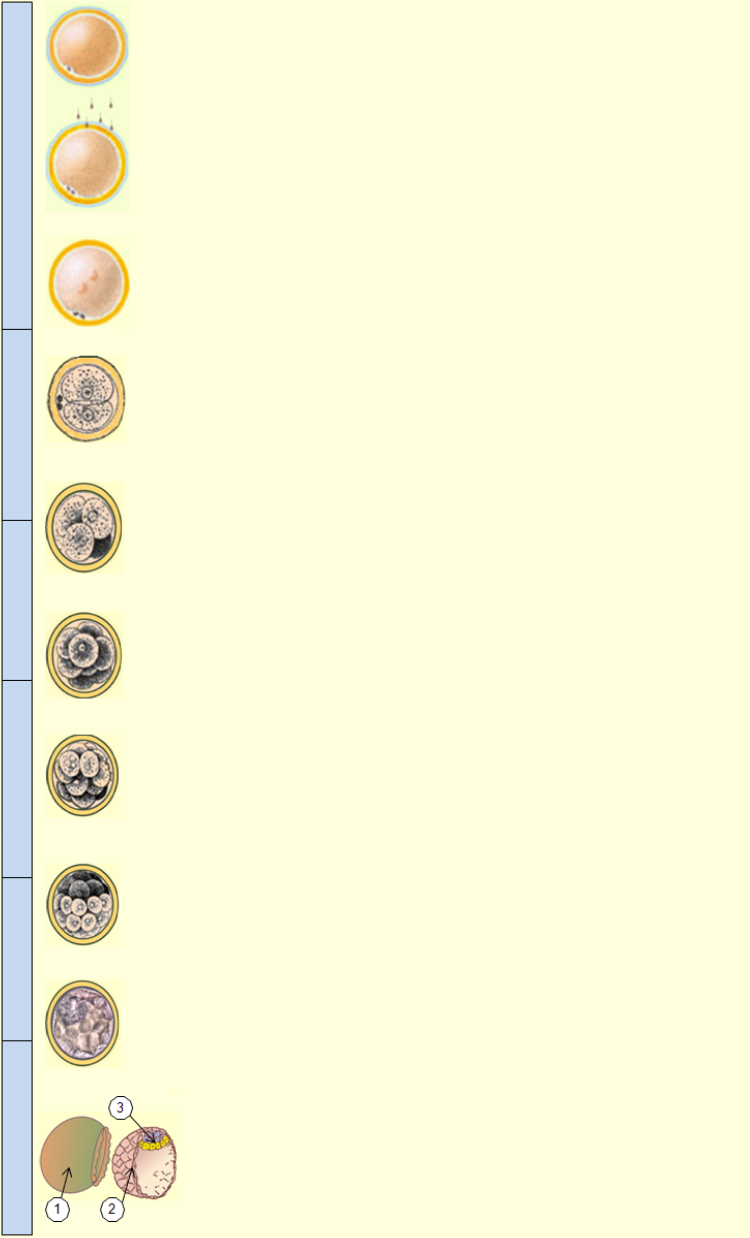 The table below shows the progression and the successive transformations that will undergo the ovum during the period when it will remain in suspension in the maternal body (oocyte 1 at the moment of ovulation with 23 chromosomes, then oocyte 2 after fertilization and twice 23 chromosomes, it is called zygote cell after fusion parental data with 46 chromosomes). It will go move forward in the fallopian tube to the endometrium of the uterus (uterine mucous membranes) in which he will implant (implantation). Throughout this period, he could be evacuated by a form of sweeping since it is of nothing interdependent of the woman body. Everything is implemented against any form of external aggression of this ovum retaining it within the body of the woman, but also against any self-immune defense of the mother against sperm cell and the new cell, which are both different from a genetic the woman's body.

With regard to the protection of the maternal immune system of the zygote and its 46 chromosomes, with 23 different, it is surrounded by a skin called zona pellucida resulting from the ovum and the granular cells of the corona radiata (or granulosa) surrounding the oocyte resulting from the follicle, which contained at least 23 maternal chromosomes, see 46 for the cells of the corona radiata. The zona pellucida is especially designed to ensure a protective role against polyspermy (double introduction of human sperm), as well as intrusion of a foreign sperm. Against polyspermy, the ovum has a first barrier formed by the tissue permeable of granular cells surrounding the oocyte, which will limit the number of simultaneous contacts of spermatozoids, the second is the plasma membrane rendered impassable after the first introduction.

If the zona pellucida is a very good protective system and selective during the embryonic phase when all is in suspension in the woman's body, it can only be temporary, however, since it does not allow the implementation of the entire system needed to foster the survival and growth of the embryo. That is why, during this "volatil" phase, the division of the zygote (Cleavage) with its 46 chromosomes will allow him to create a compatible protection both with the immune system of the mother than with his own.

As we can see it indeed, on the level of the last stage before implantation, it is only when the zygote divides sufficiently and produced cells specialized to generate a protective pouch, future placenta, it can be implanted again in the female body without being rejected. This duration is obviously variable according to the concerned woman, just as the division of the zygote is variable.

What is remarkable on our level, it is to perceive how much all this logic design is already registered until the least detail in this first cell when it is fertilized, since it is from this one which measures only one tenth of millimeter that the new individual in an adult state all this same process will be able to reproduce if it is of female nature. A considerable period of time will have occurred between the state from ovule and that of adult woman, but the logic registered in the oocyte 1 will have remained the same one in order to generate an individual able to procreate in its turn.

6 – Evolution of the fertilized ovum

The ovum, also called oocyte 1 at this stage, is present in each follicle and grows with it to one per cycle, from puberty until woman's menopause. After ovulation it is fertilizable about 24 hours by a spermatozoon, in the first third of the fallopian tube. It contains 23 chromosomes from the mother whose determinant female sex, X.

Upon entry of the spermatozoon in contact with the zona pellucida of the ovum, the Acrosome of the cell sperm breaks, releasing an enzyme (ZP3) that digests the complex zona pellucida covering the oocyte. The sperm nucleus then detaches from the flagellum and goes alone into the oocyte 1 which becomes oocyte 2. Just as during contact with a sperm of nonhuman race, in order to preserve the ovum with a double introduction of spermatozoids, (polyspermy) the plasma membrane of the oocyte becomes immediately impenetrable to a second spermatozoon.

The sperm nucleus contains 23 chromosomes from the father, of which the determinant sexual X or Y according to the sperm concerned (chromosomes XX = female, XY = male). The fertilized oocyte, called at this time oocyte 2, continues to evolve during its descent into the fallopian tube. Sixteen to eighteen hours after seeding of the ovum, the two nuclei from the oocyte 1 and sperm cell, are clearly visible in the cell before melting themselves together and becoming one.

Approximately thirty hours after fecundation, the zygote (fertilized ovum) begins a cellular division (Cleavage), according to a periodicity from 12 to 16 hours, without the external size of the zona pellucida (skin area) increases. This area, consisting of vitelline (nutrient material) contained between two membranes, ensures life and energy to the cells until blood connections to the uterus. These called blastomeres cells becomes thus increasingly small.

At this stage, the cells (blastomeres) are still cylindrical. They continue to divide at the same rate without increasing the total volume so. Each retains the full flexibility to generate any cell specific body whatsoever. So these are all totipotent cells, that is to say the highest level of versatility among stem cells (pluripotent, multipotentes or unipotentes).

It is at this stage, by a too rapid evolution of cells that can produce a division of the morula and give birth to identical twins (or monozygotic twins). They will then necessarily of the same sex, contrary to the twins born to two different ova.

At the stage of ten cells, they come into compaction. This term defines the transition of cells from a spherical morphology to a form called squamous whereby, their contact surfaces extend. At this stage of 8 to 16 cells, the zygote (fertilized ovum), then takes the name of morula (because of its resemblance to a mulberry).

With the approach of fifth day after fertilization, another decisive transformation occurs. The morula undergoes a buildup of fluid that forms a confluence with internal cavity called blastocoel. The set is called blastula and blastocyst during implantation.

The internal cavity (blastocoel (e) or blastocele (also called blastocyst cavity, cleavage cavity or segmentation cavity) will gradually distend the cell monolayer just like the zona pellucida that surrounds it yet (skin that protects it, but that does not allow it implantation in the endometrium of the uterus). This expansion of the blastocyst (embryonic set), then consisting of a hundred cells, occurs towards the end of the fifth day, until rupture of the zona pellucida (1): is hatching blastocyst allowing implantation in the endometrium of the uterus. This embryonic set is formed by the monolayer of trophoblast cells (2) along the internal cavity which will be the starting point of the placenta, and by a clump of cells embryoblastes (3) from which will develop the embryo and fetus.

The zona pellucida, that we had until then assimilated to any protective skin, is actually much more complex, if we look at in the detail. The overall structure below, highlights, the mechanical part of protection and selection, to which is added, however, hormonal variations, as well as the different enzymes used simultaneously depending on the steps. According to your wishes, we invite you gladly to deepen on specialized scientific sites, which adds to the complexity of the whole.

Ovarian Period of the ovum 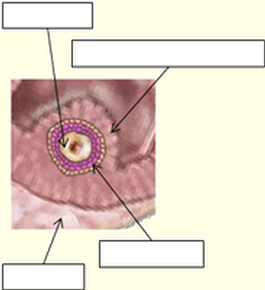 1) The zona pellucida which started to be created at the stage of the secondary follicle is gradually surrounded by cells called “granular” because of relatively cubic form. While continuing to grow, they will form several cellular layers called granulosa or corona radiata. In the moments preceding ovulation, this granulosa cans form several tens of layers around the oocyte. Part of them is going to be driven during ovulation, while the remaining part will help to produce progesterone during the last phase of the menstrual cycle. In the event of fertilization, the cells involved in corpus luteum of the ovary, are used in the production of the progesterone until the placenta takes over. 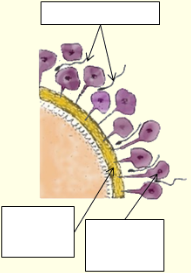 2) The filaments holding the first layer of granulosa cells are stretched at the time of the expulsion of the ovum out of the follicle and ovary. Only the first layer of these cells solidarity rest of the zona pellucida, the upper layers forming a coherent tissue called corona radiata, more or less consistent with the first layer. These granular cells secrete progesterone, which is a bait for the spermatozoids, in the same way as the follicular fluid. 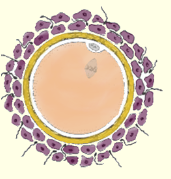 3) Clusters of granule cells are far from regular, as shown below against and often involve several layers. They thus form a kind of selective barrier, which will allow to the strongest spermatozoids to reach the ovum, but also to limit the frequency of approach and provide a first screen limiting polyspermy. 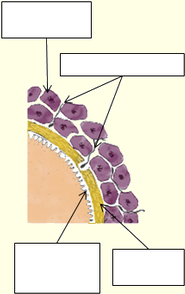 4) The ovum, as for him not being a source of progesterone is not a bait of choice for spermatozoids. In the move up of these spermatozoids is by chance that some of them will then come into contact with the zona pellucida. On the millions of spermatozoids emitted during male sexual intercourse, only a minority of them (maximum tens) will more or less gradually risk to reach the egg and allow fertilization. When the contact of the spermatozoid with the zona pellucida of the ovum the Acrosome breaks and releases ZP3 enzymes that digest the thickness of the zona pellucida, before crossing the peri-yolk  space forming reserve nutritive provisional. 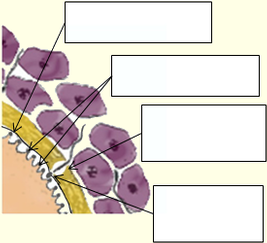 The zona pellucida is closing

The nucleus of the spermatozoid comes off

5) The nucleus of the sperm detaches from the flagellum and stands alone in the oocyte during fertilization, which causes a breakdown of the cortical granules (diameter 0.3 to 0.5 microns). The outbreak of these vesicular Pellets, located on the entire inner surface of the oocyte, releases their content that fuses with the plasma membrane, which is called cortical reaction to form the fertilization membrane, preventing the entry of new sperm, and thus the polyspermy. For some non-human races, this barrier against polyspermy is electrical and not chemical. The egg then changes immediately positivity during fertilization, which underscores the instantaneous nature of this function.

The days listed below take account fertilization immediately after ovulation, but can be shifted of 24 hours, which corresponds at the lifespan of the ovum before fertilization.

Until the morula stage, embryonic cells are totipotent (unspecialized stem cells), that is to say that each cell can give any specialized cell (skin, bone, muscle, brain ...), as well as  embryonic annexes of the embryo as the placenta, which is no longer possible after the pluripotent cells that become specialized in the development of the embryo.