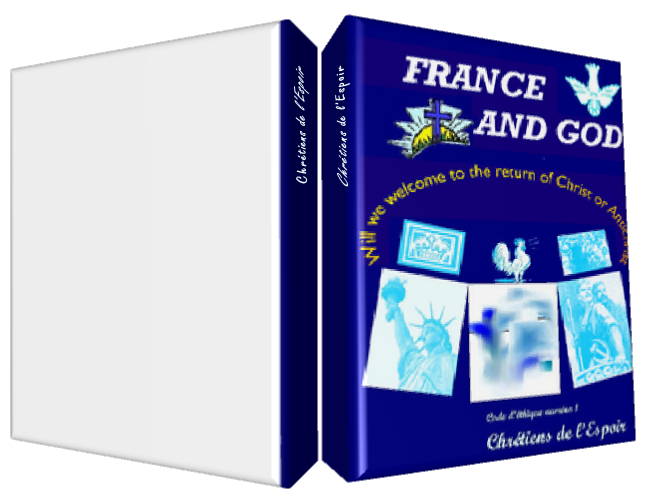 This work cannot be sold. It is offered free of charge for information by Association 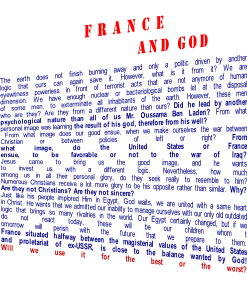 Remarks of the author

This work is meant for any person eager to understand why so many divisions reign in the name of God, and even in a Christian world that often tears.

The fault must not to be attributed to God, but to the man who builds themselves with carnal a priori that he does not control.

The earth does not finish burning away and only a politic driven by another logic that ours can again save it. However, what is it from it? We are eyewitness powerless in front of terrorist acts that are not anymore of human dimension. We have enough nuclear or bacteriological bombs let at the disposal of some men, to exterminate all inhabitants of the earth. However, these men who are they? Are they from a different nature than ours? Did he lead by another psychological nature than all of us Mr. Oussama Ben Laden? From what personal image was learning the result of his god, therefore from his well? From what image does our good ensue, when we make ourselves the war between Christian or between policies of left or right? From what image, do the United States or France ensue, to be favorable or not to the war of Iraq?

Jesus came to bring us the good image, and he wants to invest us with a different logic. Nevertheless, how much among us in all their personal glory, do they seek really to resemble to him? Numerous Christians receive a lot more glory to be his opposite rather than similar. Why? Are they not Christians? Are they not sincere?

Just like his people implored Him in Egypt, God waits, we are united with a same heart in Christ. He wants that we admitted our inability to manage ourselves with our only old outdated logic that brings so many rivalries in the world. Our Egypt certainly changed, but if we do not react today, these will be our children whom tomorrow will perish with the future that we prepare to them.

France situated halfway between the magisterial values of the United States and proletariat of ex-USSR, is close to the balance wanted by God! Will we use it for the best or the worst?